In south central Panama, the Azuero Peninsula is bordered by the Pacific Ocean. The main cities here are Las Tablas and Chitré. A small cape on the western tip of the peninsula, known as Punta Mariato, is the southernmost point on the mainland of North America.

If you like noisy street parties, Las Tablas is the place to be in Panama during the four days preceding Ash Wednesday. That’s when the annual Carnaval happens in this part of Latin America. We opted to pass on these festivities and timed our drive from Boquete to Pedasi accordingly.

The little village of Pedasi, (population 2,500 and no traffic light) is where we are renting a small house and trying to live like locals. This area was recently described as one of the best places in the world to retire, so we thought we’d come and see what it was all about.

We’re not completely local though. We’d need a few chickens and a rooster or two to blend in with this neighbourhood. But, the rooster next door does a good job of getting us up early each morning so we kind of feel local. We are sweating like the locals with steady +33C daytime temperature. 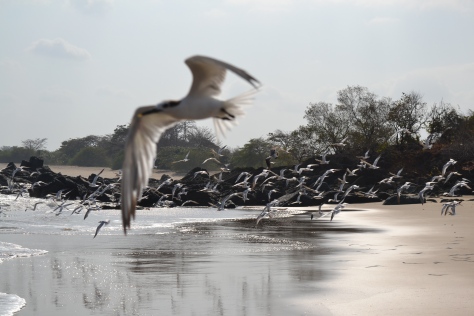 Since coming here, we’ve met quite a few expats and some very friendly locals. Whenever we’ve passed people on the street its always with a wave and a … “Buenas” or “Hola”. This is indeed a very safe and friendly spot.

We’ve been in Pedasi a week now, exploring the local area and spending our time looking at the beaches, other communities and real estate opportunities. Se Vende (For Sale) signs are plentiful and so are the choices. Building lots can start at $25,000US and go up depending on size and location. Most building lots are ¼ to 1/2 acre in size. Newly built homes can start at $175,000US. Older resale homes can be had for less, again depending on size and location. If you want waterfront property there’s a premium for that, but again, lots of choice. Apparently Prince Hans-Adam II of Liechtenstein has a place on the beach near here.

We found two or three nice choices that are move in ready. One lists at $175,000US and is 2 kilometres from Pedasi in the village of Limón. It comes with close to an acre of land and a separate guesthouse that rents for $800 – $900US a month. The other house, situated on close to a half an acre, is in Pedasi and lists for $165,000US. It also has a separate guesthouse that created $20,000US in rental income during the last 12 months.  After allowing for the currency conversion, we certainly haven’t found any real bargains here.

Next week we drive back to Boquete. We have tickets for the annual Boquete Jazz and Blues Festival. Until then, hasta la vista amigos y cuidate!

2 thoughts on “On A Peninsula Called Azuero”